As soon as you become the parent of a tiny, adorable baby, all forms of social politeness fly out the window. If you don’t believe me, I might only ask: was it socially acceptable to whip out your boob in public before you became a mother? Did you talk openly about feces multiple times per day in your pre-parent days?

One of the starkest differences between pre-parenthood and post-parenthood is the frequency with which you find yourself talking about poop: different types of baby poop; color and consistency; normal vs. sick baby poop; breastfed vs. formula fed baby poop; poop in your baby’s bathtub; poop that touched your kid’s crib mattress … the list goes on.

And that’s before your baby starts eating solids and the oh-so-wonderful colors, shapes, and consistencies that come along with that.

While plenty of websites offer a poop chart to understand what’s happening under your little darling’s hood, we thought we’d do something a little bit different.

And by a little bit different, I actually mean a lot different.

Like, right up there with the best funny baby poop memes on the Internet.

Introducing our baby poo card game. It’s based on Memory/Concentration, and is meant to be fun, rather than educational.

Seriously folks: don’t use this game to diagnose your baby, or in lieu of medical advice.

DO use this game when you’re in need of a fun baby shower poop game. It’s a great complement to a more “traditional” baby shower diaper game, or is a fun (and more eco-friendly) alternative to any games using disposable diapers.

If you want to get really crazy, bust this game out over beers with that new parent couple you’re trying to become friends with. If they laugh, you’ll know you’ve struck friendship gold.

DISCLAIMER: If your baby is blasting out strange and fowl deuces, and you’re worried about his or her health, this card game will not help you. Seriously: call your paediatrician.

Our game contains 23 different diaper cards, with each card representing the different types of baby poo you might come across as a parent.

Without further ado, here are the cards…

Give your baby a big round of applause for their first deuce! Newborn poop is known as meconium, and is a dark green color (often dark olive green).

It usually lasts three to five days and is the stickiest of sticky baby plops you’ll experience!

Once your baby starts rolling or zooming around, you better hope those diapers can contain all his or her “gifts” to the world! If you are experiencing constant leakage, your baby’s diaper is probably too big or too small.

Starting your baby on solids? Get ready for a whole new world of poo, including some perfectly formed logs in your darling one’s diaper (sometimes two of them side by side)!

You might gag cleaning these up, but just remember: healthy baby poop means a healthy baby!

This one happens to us. All. The. Time.

Your baby’s face turns red. She’s straining so hard, it looks like her eyes are going to pop out of her head. But when you go to change the diaper?

Nary a poop to be found. It’s the great mystery of our life.

On a serious note, if your baby keeps delivering white or grey baby poop, or anything that’s chalky, call the doctor. It could be a sign of digestive problems.

Digested blood in baby poop shows up as black specks. They’re most likely nothing to worry about, and it’s probably from your baby swallowing blood from your sore and bleeding nipples.

Motherhood is great, though.

The Hold the Mustard

Despite this being a type of typically healthy baby poop, chances are it will have you reconsidering your sandwich order, right?

You can’t look at mustard like baby poop all day without it impacting your condiment choices.

If you find yourself feeling excited the first time your darling poops out a fully formed baby poop log, take it as a sign it’s time to get some new hobbies.

Seriously guys: this is poop we’re talking about.

A tiny bit of blood in baby poop might show up as blood streaks, and can be a sign of a milk allergy. While not always the case, The Dracula is often a lactose intolerant baby poop, so you may want to call the doctor.

The good news? It has nothing to do with your baby being a vampire.

Hard or pebble like baby poop is a sign of constipation, poor thing. Constipated babies are tough to watch, because you have to endure your little muffin straining with all their might.

Water, prunes and pear juice can help your baby go poop, but check with the doctor first (especially for younger babies).

Tan colored poop that looks like peanut butter is normal for formula-fed babies.

Formula fed baby poop is usually firmer than breastfed poops, and can range from light tan to brown (and sometimes green and yellow too – it’s a wonderful rainbow!)

Yellow watery diarrhea in babies could be a sign of either an infection or allergy. But finding a Canned Soup in the diaper isn’t always a bad sign.

Lots of babies have runny yellow poops with milk curd chunks throughout.

When you find the equivalent of multiple canned soups in one diaper, you’ve got a Mount Etna on your hands.

Every parent eventually comes face-to-face with a Mount Etna.

How you handle it is what matters.

When your baby’s poop find its way up the butt crack and starts sneaking out the back of his diaper, you’ve got a backscratcher on your hands.

For everyone’s sake, let’s hope it doesn’t climb all the way up into “neck-tickler” territory.

Before you had a baby, you probably had no idea that poop comes in all kinds of colors – even green!

Easy to pass, easy to clean, this is a “one-wiper” that will make your baby happy, and you too!

The sun is rising. The birds are chirping. The coffee is brewing. Mornings are so delightful, right?

Well…they used to be, at least.

That is, until your baby decided to greet you with the overwhelming odor of a dirty diaper, first thing.

After experiencing a few sequels, you’ll probably get a feel for your baby’s personal dumping regime, and won’t be so quick to the immediate diaper change.

Like a fine wine, it’s best to let it breathe for a minute (although don’t actually breathe it in, because: gross!)

When your kid expresses an interest in exploring his or her creative side, might we suggest you buy your future Picasso some crayons or finger paint?

One of the whackiest of baby poop colors, blue baby poop is an actual thing, folks!

Introducing your little one to solid foods means he or she will introduce you to the wonderful world of chunky baby poop!

It’s all coming your way.

Like the rapid dog of poops, this one foams a bit. Despite it’s resemblance to your afternoon coffee, we’re pretty sure you won’t get quite the same enjoyment out of it.

Looking for More Baby Shower Games and Baby Poop Games? Our Game is priced to be affordable for all, but if you’re in need of more, here are some other great ideas:

Did Baby Poop Scratch Card Lottery Game – A hilarious set of scratch cards
Lucky Little Stinker Scratch Card Game – A different style of scratch cards – still funny!
Pacifier Hunt Baby Shower Activity – Great to get guests on their feet and mingling a bit
Pin the Pacifier on the Baby – A fun twist on the classic Pin the Tail on the Donkey
Baby Facts Guessing Game – A classy game in case you don’t thing poop games are funny!

How to Play the Baby Shower Diaper Game

This hilarious twist on the classic card game of Memory/Concentration is the perfect choice for new parents and baby showers. Get to know the baby poop and diapers you might meet as a new parent with this free printable baby shower game.

Before playing the game, you'll need to buy the cards and set them up using the instructions included in your download. Then you can move on to set-up and play.

Set up the Game

After flipping over two cards that don't match, players can replace them to a different spot in the game, moving cards around.

Before playing the baby shower diaper card game, you'll need to buy the cards and download them. You'll also need to prepare the cards for play..

For a two- or three-player game, download and print two color copies of the free baby diaper cards on 8.5x11" paper. This will create one deck of 46 cards.

To play with four or more players game, add an additional deck of cards (print two additional copies of the cards to create one deck). 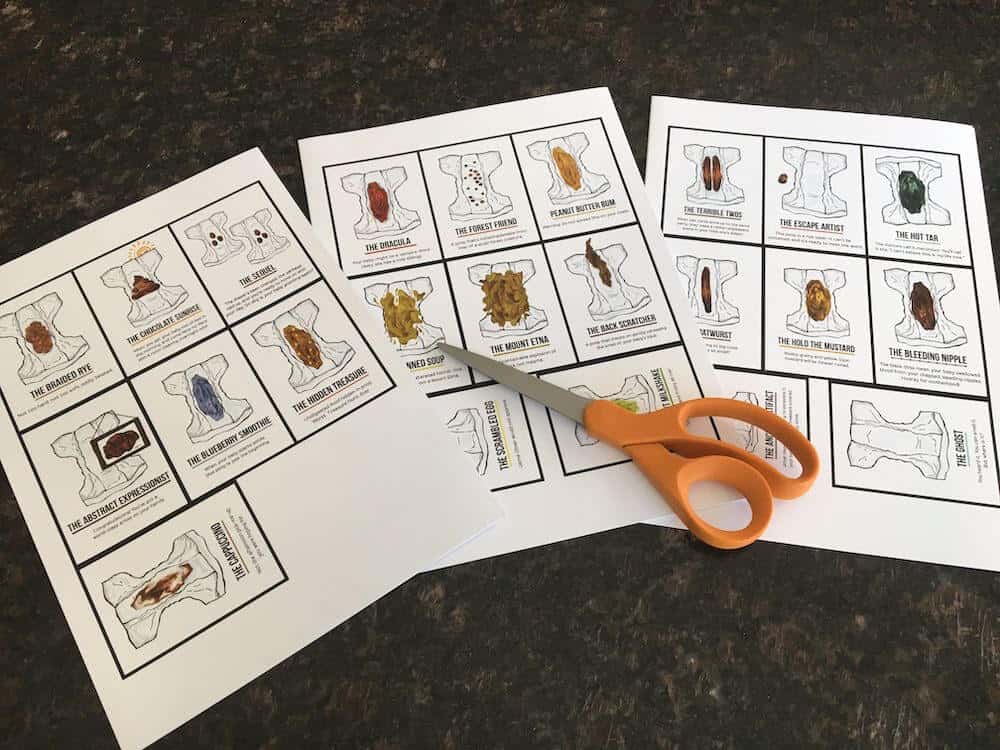 As an Amazon Associate and member of other affiliate programs, I earn from qualifying purchases.

Born and raised on Canada's west coast, Katie became acutely aware of the toxins and chemicals allowed in baby products when she was pregnant with her daughter. Long an enthusiastic researcher and writer, she realized she could help other families make more informed, non-toxic purchases for their own families by sharing what she found. Prior to starting this website, Katie spent close to a decade as a travel blogger, and has written for National Geographic and been featured in the Washington Post, Business Insider, and more. 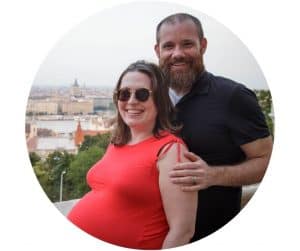 We are Geoff & Katie Green, new parents trying to make sense of life with kids! Research obsessed about finding the best stuff for our family, we thought we’d share our hard work with you.

Green Active Family is an independent review site. As an Amazon associate, we earn from qualifying purchases. We also participate in other affiliate programs, and may a earn a commission from other links. This does not affect your purchases or the price you may pay.

The information on this website is for informational/entertainment purposes only. We do our own research and share the results. While we do our best to ensure the info is accurate at the time of writing, we’re not perfect and recommend you confirm things on your own!